Ricochet is a very powerful turret for defenders, attackers, and mid-fielders alike, but it’s often considered a “noob” turret – a weapon that doesn’t require much skill to use effectively. This most certainly is not the case in many situations, despite popular belief, and anyone who knows how to even rotate their turret is a living testament of this. There’s quite a bit more to this turret than meets the eye, something Rico fans know and love. Let’s examine this mid-range powerhouse and see what makes it a devastating weapon in the right hands. 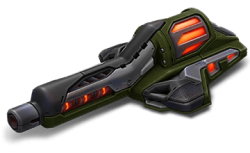 Ricochet was introduced with Freeze, Thunder, and the other Tier 2 turrets back in the old version of Tanki Online, before the rebalance and graphic updates. It was the second-to-last M0 turret to be unlocked, and the second-latest M3 since it was unlocked at Third Lieutenant. This version of Ricochet is a bit different from what we’re used to – the projectiles traveled considerably slower with its first debut, and there was more a considerable amount more recoil. At this point, Ricochet was mostly regulated to combat at medium-close ranges, since their shots were notoriously hard to aim. It was also great for parkour, allowing Wasp and Hornet/Ricochets to climb walls with ridiculous ease.

After the large updates that followed (rebalance and graphics updates), Ricochet had its stats adjusted to what we see today. The projectile speed was increased significantly, the recoil was reduced (to the anguish of parkourists), and several other critical parameters were tweaked. The following physics update further reduced the ability of parkourists to climb walls. Recently, the developers decreased its energy consumption, though, effectively giving it more shots per clip. This made Ricochet a far more suitable weapon in combat, not expending its full clip quicker than the likes of Firebird, Freeze and the like.

Ricochet has quite a bit of recoil. It’s nothing to worry about if you’re using a medium or heavy hull, but if you’re using Wasp or Hornet, it’ll decrease your acceleration noticeably when firing forwards. On the bright side, this recoil lets you stabilize yourself when jumping from high surfaces. And, of course, it’s good for parkour when mounted on Wasp.

Ricochet can mow down most enemies fairly quickly if you can land hits consistently, especially with a Double Power active. Even Mammoths will take quite a beating from a someone unloading a clip into them.

The bouncing effect of its rounds allows you to hit targets that aren’t in your line of sight; very useful for clearing out tunnels and taking out camping enemies.

The impact force makes it very hard for a scoped Shaft or a Railgun to aim at you.

Ricochet has limited ammunition. While it’s easy to destroy enemies witha full clip initially, you’ll usually be low on ammo afterwards. If you don’t have enough ammo to take out an incoming enemy, you’re going to be in big trouble if you can’t run.

The range of this weapon isn’t that impressive. It’s enough to deal with enemies at medium range, but you can’t hit enemies at infinite ranges like you can with Thunder or Railgun.

Rico shots take time to travel. This makes it hard to aim at enemies the further away you are, since you have to lead your shots.

You can hit yourself with your own rounds if you’re not careful with the bouncing feature. This usually isn’t a problem, but accidental self-destructs when low on health aren’t uncommon.

Because Ricochet’s impressive DPS is mostly due to its rate of fire, you need to keep a constant line of sight to your target to damage them effectively. The ricochet effect can mitigate this to some extent, but it’s still easy for Wasp/Railguns to take you out from cover.

Remember the non-turret-turning Hornet/Ricochets? They’re a good example of what NOT to do with this turret, and are the reason that Ricochet has a poor reputation associated with those without any form of skill. If you want to be effective with this turret as you climb the rank ladder, take these tactics into mind.

Leading your shots: Ricochet projectiles take some time to travel. If your target is far away, they might not be in the path of your shot by the time it reaches them. To mitigate this, fire your shots slightly ahead of them, towards the direction they’re travelling in. If you do it correctly, you can land hits at surprisingly far distances. This is hard to master initially, but after a considerable amount of practice, it makes using Ricochet much easier.

Utilizing the rebound effect: This is something that doesn’t get capitalized as often as it should. Ricochet projectiles will bounce off of any non-tank surface they hit, but if the surface isn’t vertical, it will bounce off at an odd angle. If you’re on level ground and you fire a shot at a vertical wall, the shot will stay at your altitude. You should keep an eye out for vertical walls because of this- they’re much easier to accurately hit enemies with. Note that bounced shots have some degree of auto aim, which will help you out.

You should use this when you want to attack an enemy that isn’t in your direct line of sight. For instance, if they’re hiding behind two vertical walls, fire your shots at the back one. If angled correctly, they’ll bounce back and forth between the two surfaces until they hit. This is really useful when fighting in tunnels, like those in Silence or Noise.

Knowing your Ricochet’s damage: Ricochet destroys things quickly, but knowing exactly how many shots it will take to down a target will make your job a lot easier. Check your damage markers, take note of how much damage a certain hull will typically require to destroy at your rank, and keep mental note of any modules on-field. Calculate accordingly.